President of Poland Lech Kaczynski believes that it would be "good" for neighboring Ukraine to join NATO. The Ukrainian prime minister, however, has recently decided to put accession talks on hold. 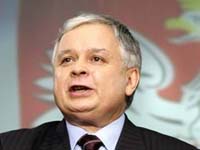 "Naturally, this disturbed me," Kaczynski said about the decision on Monday.

"Our whole plan of stabilization of the area southeast of Poland was based on Ukraine's admission to NATO as soon as possible," he said in an interview with The Associated Press in New York ahead of this week's U.N. summit, the AP said.

He described NATO as an "exporter of peace and stabilization."

Poland, a NATO member since 1999, has been advocating a quick entry of Ukraine.

"There is no particular lack of stability there, nevertheless it would be good if it were in NATO," Kaczynski said.

Last week, Ukraine's new prime minister, Viktor Yanukovych, told NATO that he was putting moves toward membership in the alliance on hold, but he said the former Soviet Republic still wanted to join the European Union.