Hurricane Lane swerved toward Mexico's Pacific coast as a dangerous Category 3 storm on Saturday, whipping the mainland with hurricane force winds after battering the resort of Mazatlan. 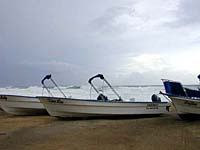 The storm knocked out power to at least parts of Mazatlan, a resort and retirement community popular among Americans, and forced officials to cancel the traditional Independence Day parade.

It was projected to weaken slightly to a still-dangerous Category 2 hurricane before advancing 80 kilometers (50 miles) inland to slam the state capital of Culiacan, a city of 750,000, in the afternoon.

Earlier this week, rains lashed coastal towns to the south, causing a landslide that killed a 7-year-old boy Thursday in Acapulco and flooding across western Mexico that forced hundreds of people to abandon their homes, reports AP.

With top winds near 205 kph (125 mph), the center of Lane was just off into the Pacific coast, the National Hurricane Center in Miami said. A hurricane warning was in effect for a 350-kilometer (210-mile) stretch of coastline, from El Roblito to Topolobampo.

By late morning Saturday, Lane was centered about 130 kilometers (80 miles) northwest of Mazatlan and was moving north at nearly 17 kph (10 mph.) It was just offshore.

The city is the capital of Sinaloa state and is a center for the region's booming agriculture and food-processing industry. It's also notorious as the hometown of several of Mexico's top drug traffickers.

The storm's turn earlier projections had it heading toward the Baja California Peninsula caught residents of Mazatlan off guard. Many awoke to strong winds and a pounding rain.