U.N. Secretary-General Kofi Annan revealed his hope for a female successor Wednesday by repeatedly referring to the next secretary-general as "she." 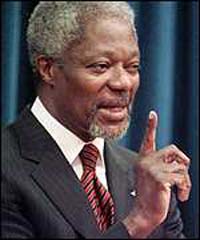 Annan, speaking at a news conference in the Turkish capital about the divided island of Cyprus, said: "I would hope that whoever succeeds me, he or she will pursue this file aggressively, AP reports.

Pushed by a reporter to elaborate on his choice of pronoun, Annan said he hoped a woman will be considered for the job.

"Obviously, the decision is out of the Security Council, but I hope the door will be open to a he or a she," he said. "A she has never had it."

In 1997, Annan, a native of Ghana, became the United Nations' seventh secretary-general. He completes his term at the end of 2006.