Prime minister Tony Blair is said to have decided to step down from his leadership role in July 2007 after more than 10 years lof service to Britain, a newspaper reported Wednesday after two Cabinet members acknowledged he was likely to leave office next year. 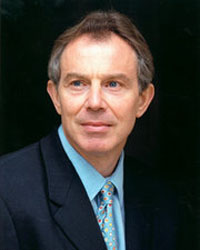 As if to emphasize that Blair is still prime minister, his office announced Wednesday that he plans to visit the Middle East soon in an effort to promote peace in Lebanon and between Israelis and Palestinians. There was no word on where or when Blair would go, AP reports.

A junior member of Blair's government, meanwhile, resigned his post after refusing to withdraw his name from a letter demanding that the prime minister set a date for stepping down. Tom Watson, who was minister for veterans in the Ministry of Defense, said in his resignation letter to Blair that "I no longer believe that your remaining in office is in the interest of either the party or the country."

Blair issued a statement saying he would have fired Watson if he hadn't resigned.

The Sun newspaper said Blair intends to resign as leader of the governing Labour party on May 31 - triggering a leadership election likely to take around eight weeks, The Sun reported. He would then be replaced as prime minister on July 26, the newspaper said.

Blair's official spokesman declined to comment on The Sun's report, saying only that any leak to the newspaper had not been authorized by the prime minister's office.

The Sun cited no sources for its report. The paper, owned by Rupert Murdoch's media conglomerate News Corp., has been a crucial supporter of Blair since he took office in 1997.

The paper chastised Labour Party lawmakers who are demanding that the prime minister step aside more quickly, saying they were flirting with electoral self-destruction.

"Childish (legislators) hounding Tony Blair must grow up and shut up," the paper said in an editorial. "You are committing an act of madness which will destroy your party. If you really love Labour, leave Tony Blair alone to finish the job."

Pressure from within Labour for Blair to announce a time frame for his departure has intensified recently. Critics worry that the uncertainty over when he will leave is damaging the party's electoral hopes, while his waning popularity is giving the resurgent opposition Conservatives an opening.

Blair last week shrugged off demands that he announce his plans at Labour's annual conference later this month.

Work and Pensions Secretary John Hutton called for an end to the widespread speculation about when Blair will leave office.

"My view is that we should get away from this obsession about dates, and particularly forcing a date out of the prime minister," he told British Broadcasting Corp. radio. "We should respect his mandate to lead the government because he has just been re-elected as prime minister, and we should as a party and a government get on with the serious job of tackling the big issues that Britain still faces."

Blair said in October 2004 that he would not seek a fourth term and later promised to give his successor - widely expected to be Treasury chief Gordon Brown - time to settle into office before elections likely to be held in 2009. Blair led his party to its third straight win at the polls last year, although voters sharply reduced Labour's majority in Parliament.

Blair has been reluctant to set a specific timeframe for his resignation, fearing it would make him an instant lame duck, draining his remaining authority and power.

But two members of Blair's Cabinet said Tuesday it was likely he would leave office some time next year, a move interpreted in some quarters as a Downing Street-sanctioned attempt to placate party critics.

"The perceived wisdom, although I might have advised something differently, is that he acknowledges that by (the Labour Party conference in September 2007), there'll be a new leader in place," Social Exclusion Minister Hilary Armstrong told the BBC.

The Daily Mirror tabloid reported Tuesday that Blair's advisers were planning the details of his final weeks in office, but the paper did not specify when that might occur. A national tour and a host of TV appearances are in the works to create a triumphant end to Blair's years as prime minister, according to a memo purportedly leaked to the paper.

A tour of at least six cities would send a message that Blair's legacy was not the specific changes he made, "but the dominance of (his political) ideas ... the triumph of Blairism."

Neither the prime minister nor many of his senior staff have seen the memo, Blair's official spokesman said Tuesday. He would not comment on the accuracy of the Daily Mirror's excerpts.