Japanese Princess Kiko finally delivered a baby boy – the royal family’s first male heir in forty years. The healthy boy, born on Wednesday by means of Cesarean section, eased the succession crisis for the family and ended the political debate in the country over the possibility to allow women take the Japanese throne. 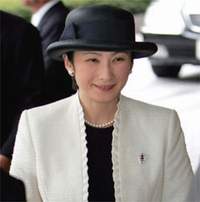 Kiko, 39, underwent a Caesarean section a Tokyo hospital, bearing a boy who is third in line to the throne after Crown Prince Naruhito and Kiko's husband, Prince Akishino, 40. No name was immediately announced.

The arrival of a new prince - Emperor Akihito's first grandson - defused a succession crunch in the coming generation of the royal family, which traces its roots back some 1,500 years.

The closely watched birth was also likely to put the brakes on a fractious debate over whether to change Japan's 1947 imperial law to allow women to inherit the throne. Under the current law, only men in an all-male line to the emperor can assume the crown.

While eight women have ruled as emperor over the centuries, the last taking the throne in 1763, they served mostly as placeholders until a suitable male could be found, and none passed the crown to their offspring.

The birth took place under intense public scrutiny and expectation. News of Kiko's pregnancy and delivery date led to rallies in shares of baby-care companies amid hopes that other Japanese would be inspired to have more children.

Kiko, who already had two daughters, was hospitalized on Aug. 16 after showing symptoms of partial placenta previa, in which part of the placenta drops too low in the uterus. Officials, however, said the pregnancy was never in jeopardy.

The gender of the baby had been a closely guarded palace secret, though Japanese tabloids had speculated the child would be a boy - satisfying the hopes of conservative Japanese who want to preserve the male-only imperial line.

"I'm from the old generation, so I think it's better for a boy to become the emperor," said Chioko Hasegawa, a 74-year-old cleaning woman, as she worked in central Tokyo.

The birth follows a tumultuous decade for Japan's royal family, which is still highly respected by the public and is largelyshieldedfrom view by the secretive Imperial Household Agency.

Emperor Akihito's eldest son, Naruhito, 46, has a daughter - Aiko, 4 - with his wife Masako, but the couple have no sons.

The imperative of producing a male heir may have taken its toll on the Harvard-educated Masako, 42, who gave up a career in diplomacy to marry Naruhito. She suffered a miscarriage in 1999 before Aiko was born, has struggled with stress-induced depression in recent years.

The possibility there would be no male in the next generation had prompted serious discussion - and a surprisingly heated debate - about allowing a female to assume the throne and pass it on to her offspring.

Such a step was recommended by a high-level panel late last year, and Koizumi vowed to submit a reform bill to parliament.

But conservatives mounted a vociferous offensive against the plan, arguing that the essence of the imperial line was the emperor's Y-chromosome - and that allowing the daughter of an emperor to pass the throne to her child would destroy that tradition.

Opponents suggested revival of concubines to produce imperial heirs, or the reinstatement of the aristocracy - banned after World War II - to widen the pool of imperial Y-chromosome carrying candidates.

The debate was so fractious that Koizumi shelved the reform after Kiko's pregnancy was announced in February, and it was likely there would be no rush to return to the fray following Wednesday's birth of a male heir.

"I see the debate stopping completely for a while," said Koichi Yokota, constitutional law expert at Ryutsu Keizai University in Ibaraki. "It's a divisive issue, and not something the new prime minister will want to tackle right away."

In addition, Chief Cabinet Secretary Shinzo Abe, a conservative who is widely expected to replace Koizumi later this month, suggested on Wednesday he was less enthusiastic for reform than his current boss, calling for caution.

"Reforming the Imperial Household Law is an important issue that concerns the stability of the imperial family," he told reporters. "We must carry on the debate in a careful and calm manner."

Some Japanese, however, argued that the reform debate should continue, since the birth of a single boy may simply postpone the question over succession.

"There is no need to stick to a male heir. Regardless of gender, whoever is next in line should take the throne," said Mai Yanagida, a 20-year-old woman. "I think it's fine if Princess Aiko becomes the next empress."