A German university has returned a tiny sculpture taken from the 2,500-year-old Parthenon a gesture the government said it hoped would bolster efforts to bring back the Elgin Marbles from the British Museum. 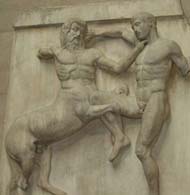 The 8-by-12-centimeter (3-by-5-inch) relief sculpture of a man's foot was handed back to Greece by the University of Heidelberg.

"This is a major symbolic gesture ... a new page in the previously deadlocked debate for the return of all (Parthenon) sculptures from museums abroad," Culture Minister Giorgos Voulgarakis said Tuesday, a day after visiting the southern German university and receiving the sculpture.

Greece is seeking the return of a much larger collection of Parthenon sculptures the Elgin Marbles from the British Museum in London, arguing that they are an integral part of temple on the Acropolis hill.

The marbles were removed by Britain's Lord Elgin in the early 19th century.

Greece failed in a bid to bring the marbles back, on loan or permanently, in time for the 2004 Olympics in Athens but has pressed ahead with the campaign and construction of a a new Ђ129 million (US$165 million) museum at the foot of the Acropolis that is due to be completed next year.

Voulgarakis said a space in the new museum had been reserved for all Parthenon sculptures still housed abroad.

The University of Heidelberg "has take the first step toward reuniting the Parthenon sculptures, recognizing that there was no scientific, legal or moral justification for retaining possession of them," Voulgarakis said.

"The case of the Parthenon is unique ... and does not set a precedent for other monuments and collections," he said. "This is not an issue of national pride. I will never stop saying it ... The reunification of the sculptures is a debt toward history."

The Heidelberg sculpture belongs to the north section of the Parthenon frieze.

Athens has stepped up pressure in recent months to reclaim ancient artifacts.

Last week, two sculptures were returned by the J. Paul Getty Museum in Los Angeles: a marble relief from the northern island of Thassos and a black stone tombstone believed to be from near Thebes dating to the sixth and fourth centuries B.C.