California Gov. Arnold Schwarzenegger said Tuesday that he will veto a universal health care bill that is headed for his desk, claiming the measure would set up a "vast new bureaucracy" that would be too expensive. 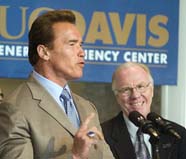 The Republican governor said the single-payer system would "cost the state billions and lead to significant new taxes on individuals and businesses, without solving the critical issue of affordability.

"I won't jeopardize the economy of our state for such a purpose," the governor said in a statement.

The bill's sponsor, Democrat Sheila Kuehl, said Schwarzenegger's comments indicated he "has not read the bill, doesn't understand the bill or is being completely misdirected by his handlers." She said the measure would save money.

"Where there are no cost controls at all now, and enormous administrative overhead and profit for insurance companies, there would have been a transparent system that actually would succeed in making health care coverage affordable in California," she said in a statement issued Tuesday.

The bill would provide every California resident with health insurance through a system controlled by a new entity called the California Health Insurance Agency. It would be under the control of a health insurance commissioner appointed by the governor.

The legislation also would establish a state commission to recommend to the governor and Legislature how much to charge patients and businesses in premiums to help pay for the system.

Kuehl said the premiums would have "taken the place of all premiums, copays and deductibles we now pay, saving every person who now pays for health care significant money."

The bill was approved by lawmakers last week as they wrapped up their 2006 session, but it has not reached Schwarzenegger yet, aides said Tuesday, reports AP.