The 9th anniversary of Mother Teresa's death was marked by the nuns of the Missionaries of Charity order, which she originally founded. There was a special feast day on Tuesday, AP reports. 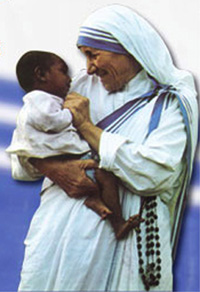 "Since her beatification, this day is being observed as her Feast Day," said Sister Nirmala, her successor as head of the order. "Today we celebrate Mother's birth in heaven."

Commemorations began in the morning with a large mass attended by the nuns, people affiliated with the order and supporters of Mother Teresa, the Press Trust of India news agency reported.

It was then followed by a cultural performance by novices at her tomb, which was covered in candles and flowers.

Mother Teresa, an ethnic Albanian who was born in what is now Macedonia, devoted her life to serving the poor in India and elsewhere. In 1929, she came to Calcutta where she later founded the Missionaries of Charity in 1950. She won the Nobel Peace Prize in 1979.

Pope John Paul II put her on the fast track toward sainthood after she died in 1997 at the age of 87.