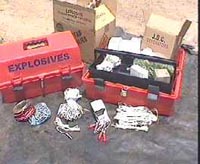 The sweep was carried out at 2 a.m. (0000GMT) in Vollsmose, a mostly immigrant suburb west of Odense, Denmark's third-largest city.

Lars Findsen, the head of the Danish Security Intelligence Service, said the suspects "had acquired material ... to build explosives in connection with the preparation of a terror act."

He said the suspects - both ethnic Danes and people with immigrant backgrounds aged between 18 and 33 - would face a custody hearing later Tuesday.

Findsen did not reveal the planned target of the attack and said it was hard to evaluate how far the suspects had progressed in their preparations.

"With the general terror situation, the Danish Security Intelligence Service didn't want to run any unnecessary risk," he said.

Justice Minister Lene Espersen said the group had been under surveillance for some time.

"It is that surveillance that is the basis for the arrests," she said in a statement.

Denmark raised its terror preparedness after the terror attacks in London last year and the global Muslim fury earlier this year over cartoons of the Prophet Muhammad first published in a Danish newspaper.

Tuesday's arrests would not prompt the Scandinavian country to raise its terror alert further, Findsen said. He also said the sweep was not related to a terror investigation in Germany in which four Lebanese suspects are being held in connection with a failed train bombing attempt, the AP says.

German media claimed one of the suspects, Youssef Mohamad el Hajdib, who was arrested Aug. 19 in the northern German city of Kiel, was heading to Denmark. German and Danish media reported German police found a telephone number in his pockets to an imam living in Odense.

The Danish arrests came two weeks after four suspects in custody since October were charged with supplying explosives for a planned terror attack in Europe. Police in Bosnia say they foiled the plot when they arrested two men accused of preparing to blow up an unspecified target.

Terrorists have not hit Denmark in 20 years, but the July 2005 bombings in London stirred fears that the Scandinavian country could be targeted for its participation in the U.S.-led coalition in Iraq.

In 1985, a bomb detonated outside the offices of North West Orient airlines in Copenhagen, killing one person and wounding 16. Three Palestinians living in Sweden were convicted of planting the bombs and sentenced to life in prison in 1989.