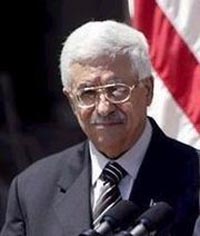 Gunmen linked to the Hamas group that rules the Palestinian Authority captured Cpl. Gilad Shalit on June 25 in a cross-border raid. Recent reports in the Arab press said a prisoner exchange was imminent, but Israel has not confirmed this. In the meantime, there has been no sign of life from the soldier since his capture.

Once Shalit is freed, Olmert will invite Abbas, a moderate from the Fatah Party, to talks based on the internationally backed "road map" peace plan, Peres told Army Radio.

"The moment this matter is solved ... this is what will happen," Peres said.

Israel is boycotting the Palestinian Cabinet because it is led by Hamas, which is sworn to Israel's destruction. Abbas is from the moderate Fatah Party, a Hamas rival.

Olmert had once been expected to forego talks with the Palestinians and try to draw Israel's final borders by unilaterally withdrawing from large chunks of the West Bank. But he has shelved those plans following Israel's recent war with Lebanese Hezbollah guerrillas, which cemented Israeli reluctance to make further territorial concessions.

Abbas advocates peacemaking with Israel, but in the past has conditioned new talks on the release of some of the thousands of Palestinian prisoners in Israeli jails. The hope for new talks was further clouded by Shalit's capture.

Olmert said Monday that Shalit had to be let go before Palestinian prisoners were released. And he said he had no knowledge of an impending prisoner exchange deal.

"I just read about it in the newspapers and know nothing of such a deal," Olmert was quoted as saying by participants in the panel's meeting, the AP says.

In the meantime, Egypt's foreign minister, Ahmed Aboul Gheit, said his country, which often mediates Israeli-Palestinian disputes, was pressing ahead with efforts to clinch a prisoner exchange.