The world should not isolate Iran over its nuclear program, U.N. Secretary-General Kofi Annan said in an interview published Tuesday. 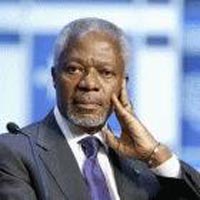 Annan, however, said Tehran must take steps to reassure the international community that it is not aiming to build an atomic weapon.

"The international community should not isolate Iran," Annan told the Madrid daily El Pais in an interview during his stop in Doha, Qatar, after visiting Iran over the weekend.

Annan has made clear he wants a negotiated solution to the impasse, which deepened after Iran ignored an Aug. 31 U.N. Security Council deadline to stop its uranium enrichment program. That set the stage for possible U.N. economic and political sanctions, the AP said.

Annan said confrontation with the Security Council "will not be in Iran's favor or that of the region."

The U.N. chief on Sunday met with Iranian President Mahmoud Ahmadinejad, who told him that Iran favored talks over its nuclear program but would not halt uranium enrichment before entering negotiations as demanded by the West.

Iran's unyielding stance appears to be based on the calculation that Russia and China, both veto-wielding Security Council members who have major commercial ties with Iran, will oppose sanctions.

The oil-rich nation insists its nuclear work is peaceful, intended only to produce fuel for nuclear reactors that generate electricity. But Iran needs to convince the international community about its program, Annan said.

"Iranians have to find a way to calm the world's restlessness over its nuclear program," Annan was quoted as saying by the newspaper.

During his tour of the Middle East, Annan has also been working to shore up the U.N.-brokered cease-fire between Israel and Hezbollah.

"This is an unbeatable opportunity not only to stabilize the region in Lebanon, but to search for an enduring peace in the Middle East," Annan told El Pais.

Read more about the controversy with Iranian nuclear program on Pravda.Ru