Jessica Simpson's voice cracks during a performance on the `Today' show

Jessica Simpson sang for the first time since injuring a vocal cord a week ago, but only made it through one song before her voice cracked. 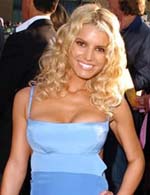 Jessica Simpson's voice cracks during a performance on the `Today' show

Simpson croaked her way through "I Belong to Me" on NBC's "Today" show Friday morning, but when it came time to hit a high note on "With You," her voice cracked. She paused for a moment and said, "All right, I tried that one," before finishing the tune.

"That had to be the most nerve-racking thing you've ever done in your life," said "Today" co-host Matt Lauer.

The 26-year-old singer tried to soothe her voice with a concoction that Lauer described as "gnarly looking." Simpson said her vocal coach had made the "nasty" mixture.

"I busted a blood vessel in my vocal cord," she told Lauer. "Next time I sing, I'll be singin' my booty off."

Simpson, who has a new album, "A Public Affair," canceled a planned appearance on CBS' "Late Show With David Letterman" earlier this week.

She appeared on MTV's "Total Request Live" on Tuesday and on MTV's Video Music Awards on Thursday night, but she did not sing, according to AP.