Oil ministers from Angola and Venezuela signed an oil agreement on exchanging technology and experience in drilling and management, an Angolan official said. 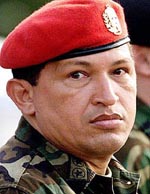 The agreement, which also mentioned refinement activities, was signed late Thursday during a visit by Venezuelan President Hugo Chavez to the small African nation, the oil ministers of the two countries said.

The two ministers, in announcing the agreement, did not give any details about it, saying only that it was centered around exchanging expertise.

But a diplomat with Angola's delegation said the two sides had agreed to swap information on drilling, technology and management experience. He spoke on condition of anonymity because he was not authorized to discuss details of the agreement with media.

The two sides will sign a general cooperation accord at a later stage, the ministers said.

Chavez, who stopped in Angola after being to Syria, said before leaving Thursday night that his visit was "the inaugural stone in the construction of a large building," reports AP.