A spate of abductions in Nigeria's oil-rich southeastern delta within the last week have prompted severe restrictions on movement of most expatriates. Militant attacks have cut Nigerian production by more than 20 percent since the beginning of the year, adding to volatility in global oil markets. Nigeria typically produces about 2.6 million barrels a day and is Africa's largest crude producer. 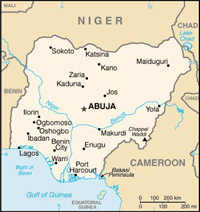 The Filipinos, held for 10 days, were handed over to the Filipino ambassador in Port Harcourt in the presence of reporters. They work for U.S. oil contractor Michael Baker Corp. of Moon Township, Pennsylvania.

A spokesman for the state governor did not say who had taken the men or if a ransom was paid.

At least 10 foreigners have been abducted in the delta within the last week. Groups usually demand greater share of the region's oil wealth -either through political changes or direct payment of ransoms.

News of the Filipinos' release was overshadowed by Sunday night's violence. Gunshots rang out through at least three neighborhoods and witnesses said armed men kidnapped foreigners from a nightclub.

George Ani, a driver in Port Harcourt, said he saw more than 10 people go into the Goodfellas night club and drag a group of foreigners away.

State police commissioner Samuel Adetuyi confirmed that gun battles took place in different areas of the city but declined to elaborate. He did not confirm or deny the kidnapping, according to the AP.

Ani said the night club attackers were wearing military uniforms and did not cover their faces. He said he did not see anyone injured in the raid.

Two private security contractors who knew people in the club confirmed the report. They spoke on condition of anonymity because they were not authorized to speak to journalists.

Witnesses said they heard gunshots in at least three neighborhoods of Port Harcourt.

Another man living in the area, who asked not to named for fear of reprisal, said he heard more than 100 shots in 15 minutes.

The three Filipinos released Monday looked worn out and were wearing the same clothes as when they were taken hostage. The men were driven off in a Jeep with the ambassador.

A colleague of the workers had said that armed men blocked their vehicle on Aug. 4 then forced them out at gunpoint.

No group has publicly claimed responsibility for taking the Filipinos. The Movement for the Emancipation of the Niger Delta, which has kidnapped several foreigners in the past, said it was not involved.

Most hostages taken in the delta have been released unharmed. Two Filipino oil workers kidnapped in June were released after five days.