Ctvrtlik would not go into specifics about the pluses or minuses of Chicago's proposal except to say officials "will be working on various alternatives regarding the opening ceremonies stadium." 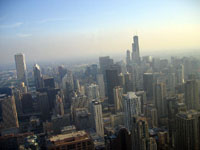 The committee members also will visit the two other U.S. cities bidding to host the games this week. The USOC, which wants to help reshape the proposals to better position the cities for the international competition, is expected to decide by the end of the year whether to submit an American bid.

Chicago Mayor Richard Daley called the meeting between the USOC and the Chicago 2016 Olympic Evaluation Committee "productive and informative." Daley spoke at a City Hall news conference at which the city was honored as the best sports city in the United States in 2006 by the Sporting News, something Daley didn't shy away from linking to the Olympic bid.

One major and expensive question about the Chicago proposal has concerned an Olympic stadium, where opening and closing ceremonies are held. Soldier Field, home to the Chicago Bears, seats 61,500, while the stadium capacity for the 1996 Olympics in Atlanta and the 1984 games in Los Angeles was greater than 80,000.

The International Olympic Committee will choose a site for the 2016 Games in 2009. Observers have said this is the United States' best shot at landing the Olympics in years. The country last hosted a Summer Games in 1996 in Atlanta.