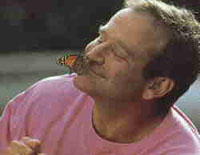 Williams "found himself drinking again and has decided to take proactive measures to deal with this for his own well-being and the well-being of his family," she said in a statement. "He looks forward to returning to work this fall to support his upcoming film releases."

Williams stars in "Man of the Year," due in October, and voices an animated penguin in "Happy Feet," slated for release in November, the AP reports.