The University of Iowa, where he taught for years, announced the death in a statement on its Web site. 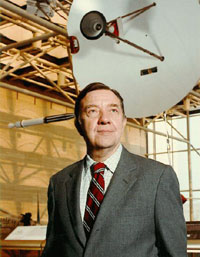 In a career that stretched over more than a half-century, Van Allen designed scientific instruments for dozens of research flights, first with small rockets and balloons, and eventually with space probes that traveled to distant planets and beyond.

Van Allen gained global attention in the late 1950s when instruments he designed and placed aboard the first U.S. satellite, Explorer I, discovered the bands of intense radiation that surround the earth, now known as the Van Allen Belts.

The bands spawned a whole new field of research known as magnetospheric physics, an area of study that now involves more than 1,000 investigators in more than 20 countries, according to the AP.

The discovery also propelled the United States in its space exploration race with the Soviet Union and prompted Time magazine to put Van Allen on the cover of its May 4, 1959, issue.

The folksy, pipe-smoking scientist, called "Van" by friends, retired from full-time teaching in 1985. But he continued to write, oversee research, counsel students and monitor data gathered by satellites. He worked in a large, cluttered corner office on the seventh floor of the physics and astronomy building that bears his name.

Though he was an early advocate of a concerted national space program, Van Allen was a strong critic of most manned space projects, once dismissing the U.S. proposal for a manned space station "speculative and ... poorly founded."

Explorer 1, which weighed just 31 pounds (14 kilograms), was launched Jan. 31, 1958, during an emotional time just after the Sputnik launches by the Soviet Union created new Cold War fears. The instruments that Van Allen developed for the mission were tiny Geiger counters to measure radiation.

Near the 35th anniversary of the launch, Van Allen recalled in an Associated Press interview how scientists waited tensely for confirmation the satellite was in orbit.

The success of the flight created nationwide celebration. Equally exciting for the scientists was the discovery of the radiation belts, a discovery that happened slowly over the next weeks and months as they pieced together data coming from the satellite.

Van Allen continued to monitor data from the Pioneer 10 spacecraft for decades as it became the most remote manmade object, billions of miles away.

Closer to Earth, satellites had revolutionized communications, military surveillance and environmental monitoring. Asked in 1993 whether he envisioned the era of satellite communications, he said: "I guess the honest answer is not really, but I'm not astonished. That sort of thing was kicking around."

In 1987, President Ronald Reagan presented Van Allen with the National Medal of Science, the nation's highest honor for scientific achievement.

Two years later, Van Allen received the Crafoord Prize, awarded by the Royal Swedish Academy of Sciences in Stockholm each year since 1982 for scientific research in areas not recognized by the Nobel Prizes.

Besides the discovery of the Van Allen belts, the academy cited him for providing the first instruments carried near another planet, those taken on the 1962 Venus mission by Mariner 2, and for his work training other space researchers.

Van Allen was born Sept. 7, 1914, in Mount Pleasant, Iowa. As an undergraduate at Iowa Wesleyan College, he helped prepare research instruments for the Byrd Antarctic Expedition. He got his master's and Ph.D. from the University of Iowa.

After serving in the Naval Reserve during World War II, he was a researcher at Johns Hopkins University in Laurel, Maryland, supervising tests of captured German V-2 rockets and developing similar rockets to probe the upper atmosphere.

One of the highlights of this early research was the 1953 discovery of electrons believed to be the driving force behind the northern and southern lights.

Through his career, he continued to advocate unmanned satellites, once telling a panel that manned space programs have been beset by cost overruns but unmanned rockets "have delivered on their promises and have gone far beyond them."