Gaza-Egypt border reopened in one direction

The crossing was open for people traveling from Gaza into Egypt only, said spokeswoman Maria Telleria. 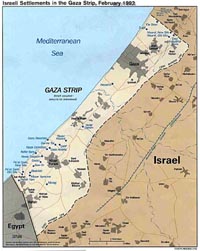 Gaza-Egypt border reopened in one direction

The crossing was intended for students to return to schools, for businessmen and for humanitarian cases, she said.

It is the second time since the latest fighting erupted in Gaza June 25 that the terminal has opened, but the previous time was for Palestinians returning home from Egypt.

Israel launched its offensive after Hamas-linked militants killed two Israeli soldiers and captured another in a cross border raid.

Earlier agreements to reopen the crossing from Gaza to Egypt broke down at the last minute and there have been several delays this time.

Telleria said it was not clear if the crossing would be open for more than one day. The Israeli army confirmed that the crossing was open but provided no further details.

Some 500 ill people, many of them cancer patients, had been issued with permission to cross the border for treatment, said Dr. Omar Shehada, responsible for overseas medical treatment at the Palestinian Authority.