Known as a tough trade negotiator with the U.S. and a supporter of financial reforms at home, Hashimoto died on July 1 from organ failure and septic shock. He was Japan's prime minister from January 1996 to July 1998. 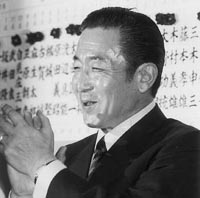 About 5,000 people were expected at the funeral at Budokan arena in Tokyo, officials estimated.

Hashimoto "had exceptional visions for Japan in the 21st century and has boldly implemented reform programs that were painful but important," said Prime Minister Junichiro Koizumi.

After he took office in 1996 as prime minister, Hashimoto made a series of controversial and unpopular fiscal decisions, including increasing the national sales tax and bailing out housing loan companies awash in bad loans.