Doctors at Primary Children's Hospital in Utah said it was the first known surgical attempt to separate twins with a shared kidney. 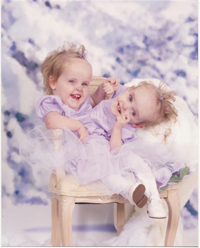 The parents broke into tears when doctors announced that the separation had been completed Monday night, and, a few minutes after, one was moved to a separate operating room.

Reconstruction was expected to take another 4 Ѕ hours.

Kendra and Maliyah Herrin were brought into the operating room at 7:15 a.m. on Monday. Doctors said the surgery to separate the sisters was completed at 10:50 p.m.

The entire operation was expected to last 12 to 24 hours, during which surgeons planned to give each girl one leg and Kendra the kidney. Maliyah will be put on dialysis for three to six months until she is strong enough for a transplant of a kidney from her mother,Erin Herrin.

The twins were stable through the first 12 hours of the operation, the doctors said earlier.

Surgeons had successfully separated the intestines, divided and reconstructed the twins' two bladders and had begun work on some internal organ reconstruction, Meyers said. They planned next to begin reconstructing the shared pelvis, she said.