The Czech branch of Hochtief, Germany's largest construction company, started building the US$8.89 million retirement home last month and plans to complete it within 18 months. 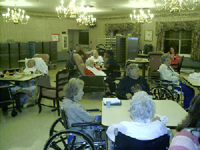 The facility will accommodate some 60 clients and will include a medical center and a day care center.

While the decision to hire Hochtief may trouble some, the head of Prague's Jewish community, Frantisek Banyai, seems not to be worried by the past of the company - even though it built the very bunker in which Hitler killed himself on April 30, 1945.

He said he negotiated only with the company's Czech branch and does not expect the German headquarters to get involved, the AP reports.

Hochtief AG acquired the Czech subsidiary in 2002. The Czech branch is currently working on a multi-million-dollar contract from the Czech government, reconstructing several government buildings in Prague.

In the past, Hochtief also worked on Nazi Germany's "Westwall" line of defenses and later on the "Atlantic Wall" in northern France. It built Hitler's Bavarian Alpine retreat, called the Berghof and constructed his "Wolf's Lair" command headquarters in Rastenburg, then in Eastern Prussia, now Poland.

The company also admitted to having used slave labor during World War II.