The bulk of the deaths are from skin cancers caused by excess exposure to the sun's harmful rays, ultraviolet radiation, says WHO. 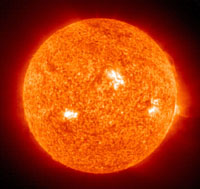 UVR also causes sunburn, triggers cold sores and ages the skin, according to its report, the first to outline the global health burden of sun exposure.

Simple measures, such as covering up when in the sun, could cut the deaths.

Dr Maria Neira, Director for Public Health and the Environment at WHO, said: "We all need some sun, but too much sun can be dangerous - and even deadly, BBC News reports.

Of the 60,000 deaths, 48,000 are caused by malignant melanomas and 12,000 by other skin cancers, the report Global Burden of Disease of Solar Ultraviolet Radiation estimates.

Ultraviolet radiation does have some beneficial effects, such as producing vitamin D, according to the FOX News.

But too much exposure to ultraviolet radiation from the sun’s rays increases the risk of skin cancer as well as other conditions, including sunburn, aging of the skin, and cataracts.