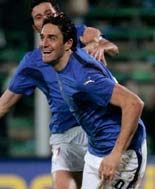 Grosso curled a left-footed shot past the diving Jens Lehmann in the 119th to put the three-time champions into Sunday's final against either France or Portugal. Del Piero added another in injury time.

In the first half of extra time, Italy started out the better team, Alberto Gilardino getting inside the German defense and sending a soft shot past goalkepeer Jens Lehmann and off the post.

The ball rolled across the front of the open goal but there were no other Italian players to score.

A minute later, Gianluca Zambrotta sent a hard shot from outside the area off the crossbar.

The two teams were level 0-0 after 90 minutes, Germany having more of the chances.

Miroslav Klose, the tournament's leading scorer with five goals, dribbled through three Italians before falling in the penalty area early in the second half.

Gianluigi Buffon made a two-handed save on Lukas Podolski's turnaround left-footer from close range, then Arne Friedrich shot over the net. As Italy tired, Germany kept coming.

But the Italians had allowed only an own-goal against the United States in five games, and their technique carried them even when their legs didn't want to.

Captain Michael Ballack put a 19-meter (yard) free kick from the middle over and wide in the 82nd, and Lehmann made a punchout save with Simone Perrotta going for Francesco Totti's pass in the box in the 84th.

Italian defenders seemed to materialize from nowhere to block shots and clear other balls when the Germans pressed the attack. Even in the air, where Germany had a decided height edge, Italy more than held its own.

Italy captain Fabio Cannavaro was everywhere in the first half. His sliding clearance of a loose ball in the box in the 15th minute came with three Germans pursuing the ball, and he did it again to Podolski in prime scoring range moments later.

Still, Germany got its opportunities. Podolski shot over the net from the 18 meters (yards) and Bernd Schneider, alone on the right side from 12 meters (yards), barely put one over the crossbar.

Italy's strategy of lobbing the ball over the huge German defense yielded few threats, but Perrotta broke in on left wing in the 16th. Lehmann came out to meet him and saved Perrotta's weak shot.

The crowd, which is right on top of the action at the stadium, didn't seem to bother the visitors. It was Mexican referee Benito Archundia who heard the fans' whistles most when he gave Tim Borowski a yellow card for a dangerous tackle in the 40th, reports AP.