With Queen’s support England's soccer team is ready for its World Cup opener. They received encouragement from Queen Elizabeth II on Friday. The touted English play Paraguay on Saturday in Frankfurt, followed by Trinidad and Tobago vs. Sweden in Dortmund, and Argentina vs. Ivory Coast in Hamburg. 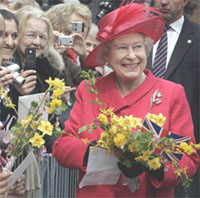 "I hope that the 2006 World Cup will prove just as exciting and inspiring as previous contests, and I send you my best wishes for a successful and rewarding competition," the monarch wrote in a letter to the England team.

The queen's grandson, Prince William, will deliver the letter in person Saturday.

Tony Blair also wrote letter. It says: "It's a great squad, well led, well managed and as you know, with everyone hoping for great things, that's a tremendous responsibility but also a fantastic opportunity. "Spirits and confidence are deservedly high. We will all be cheering you on. " Good luck to you all", reported “Pravda.ru” recently.

The focus will be on English fans as much as on stars Michael Owen and David Beckham and the sidelined Wayne Rooney, who received a go-ahead to remain with the team, but isn't likely to play against the South Americans, reports the AP.