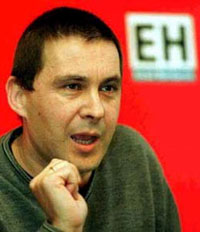 Arnaldo Otegi, leader of the outlawed Batasuna party, arrived at the National Court with three other members of the party for questioning about Batasuna's decision to name a new executive committee in March despite a ban on all political activity by the group.

Judge Fernando Grande-Marlaska has said he suspects the move violated the ban. Batasuna was outlawed by the Supreme Court in March 2003 on grounds that it was part of ETA.

Another Batasuna leader, Joseba Permach, said last week that if Otegi is sent to jail by the judge, this would in effect freeze the peace process. That comment amounted to a terrorist threat, the judge said, adding that he would question the Batasuna leaders over these remarks as well. Four other Batasuna members were to go before the judge on Thursday.

Once inside the court, Grande Marlaska temporarily suspended the questioning for screaming and booing from hundreds of right-wing protesters on the street.

The judge can either order Otegi and the others remanded into custody with no possibility of bail, set bail and jail them until they pay it, or set them free, the AP reports.

Otegi has two convictions standing against him - one for praising terrorism and another for insulting King Juan Carlos by calling him a torturer - and other court cases pending.

The government has said the cease-fire ETA declared on March 22 appears to be sincere, and Prime Minister Jose Luis Rodriguez Zapatero has said that in June he will go before Parliament to announce he is opening talks with ETA.