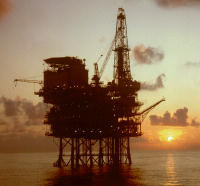 There was also an expectation in the market that OPEC, which meets Thursday in Venezuela, would keep its output steady.

In holding out the possibility of direct negotiations with Iran, Secretary of State Condoleezza Rice said Iran first must agree to stop disputed nuclear activities that the West fears could lead to a bomb.

In Caracas, Venezuela, OPEC members insisted they were powerless to battle soaring world oil prices, though they hinted at concerns about rising inventory levels around the world, the AP reports.

But for now, the 11-nation Organization of Petroleum Exporting Countries was expected to vote to maintain the existing production quota of 28 million barrels per day.

Last week, data released by the agency showed domestic natural gas inventories swelling by 83 billion cubic feet in the past week to 2.16 trillion cubic feet, or 50 percent above the five-year average for this time of year.

Natural gas futures are near a one-year low and some analysts say that if inventories continue to grow at this pace, the United States could run out of natural-gas storage capacity before winter, a prospect which should further exert downward pressure on prices.