The "Today" morning show threw a going-away party Wednesday for 15-year host Katie Couric, who is leaving to become the next anchor of the "CBS Evening News." Co-host Matt Lauer placed a tissue box on the desk at the show's opening, saying "this is not for you, this for me." 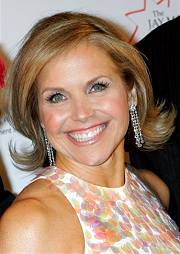 "I'm feeling happy and sad and completely out of control," Couric said, "and you know how much I like that." Couric's long goodbye began April 5, the 15th anniversary of her first day as Bryant Gumbel's co-host on "Today," when she announced that she would be leaving to accept CBS' offer to replace Bob Schieffer on the evening news.

"Today" has dominated U.S. morning television for more than 10 years, never losing a week in the ratings, and is the most profitable show on American television in advertising revenue. During her time on the air, "Today" fans watched as Couric, 49, grew from a chipper young reporter, to a mother with two girls and a young widow when her husband, Jay Monahan, died of colon cancer. She underwent an on-air colonoscopy that encouraged thousands of Americans to do the same, which doctors called the "Couric Effect."

"Today" has had some troubles in recent years, going through three executive producers and nearly being dethroned by ABC's "Good Morning America" as Couric's increasingly glamorous on-air appearance turned some viewers off. But it has rebounded strongly in the past year. NBC is shutting down its streetside Rockefeller Center studio for a summer makeover after Couric leaves. "Today" will spend the summer in an outside studio nearby.

"Today" began its tribute showing Couric awakened by an alarm clock at 5 a.m., followed by a back-up wakeup call from her driver. Weather man Al Roker joked that Couric sometimes made it to work with only about 15 minutes to spare. The first clips of her career emphasized hard-nosed interviews of politicians like Ross Perot, the first President Bush and Colin Powell, perhaps offering a message to critics who questioned her news credentials after working on a show that mixed in so much lighter fare. But "Today" also showed Couric's off-key singing with guests Stevie Wonder and Tony Bennett, reports the AP.