A Darfur rebel leader who rejected an African-drafted accord to resolve the crisis in western Sudan arrived Wednesday in Slovenia, a European country whose leader has made a surprise mediation bid. Rebel leaders "will have to decide in Slovenia whether they would accept the peace accord even with some complaints or they will insist on rejecting it," Slovene President Janez Drnovsek said. 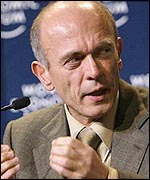 Khalil Ibrahim arrived on the day a deadline set by the African Union expires for his Justice and Equality Movement and another holdout group to agree to a deal the Sudanese government and the largest rebel movement signed May 5 after protracted, AU-mediated talks in Nigeria.

Violence has only increased in Darfur since the signing of the peace treaty, drafted by the AU with last-minute amendments proposed by U.S., British and other mediators to meet rebel demands. The peace pact was weakened because it was not embraced by all the rebel movements, and Darfur's numerous armed bands appear to be battling for strategic positions before the international community forces them to respect the cease-fire and disarmament called for under the accord. Both the rebels and the Sudan government have repeatedly failed to live up to the agreements struck over two years of negotiations in Nigeria.

The holdouts to the May 5 pact expressed concerns it did not guarantee security and compensation for war victims. Drnovsek met two of Ibrahim's top aides late Tuesday and later said they remained "firmly" against the accord. Drnovsek said it was difficult to predict whether the rebels would accept the pact before the deadline expired, but said, "We're now seeking a formula that would keep them in the game and make sure that the peace process is not suspended."

The Justice and Equality Movement is the smallest of three main Darfur rebel groups. It is linked to Sudan's leading fundamentalist Islamic ideologue Hassan Turabi, while the other rebel groups in the predominantly Muslim region are seen as secular.

More than 180,000 people have died because of fighting or related hunger and disease since rebel groups made up of ethnic Africans rose up against the Arab-led Khartoum government in 2003. The Sudanese government is accused of responding by unleashing Arab militias known as the Janjaweed who have been accused of some of the war's worst atrocities. Khartoum denies backing the Janjaweed but agreed under the May 5 peace pact to rein them in.

Drnovsek has no track record as an international mediator, and appears to have adopted the Darfur crisis out of personal interest. He traveled to U.N. in New York last year to present his plan for Darfur, but no one engaged him officially as a mediator. Drnovsek had invited all Darfur rebel groups to Slovenia in February, but the meeting never occurred because the rebels were too divided and because of international concerns such a meeting would hamper the AU-led peace process.

Drnovsek's recent interest in Darfur and efforts to present himself as an international champion of the weak and the poor have baffled some in Slovenia, once part of Yugoslavia. He left his party, the Liberal Democrats, and established his own Movement for Justice and Development. His political shift over the last year coincided with other changes. He became a vegetarian, moved from the capital, Ljubljana, to a remote village where he follows a careful diet and bakes his own bread, and has traveled to India to study meditation, reports the AP.