Ethnic Albanian and Serbian officials met for the sixth time in Vienna on Wednesday to discuss Kosovo's economic status and the disputed province's financial relations with Serbia. The latest round of U.N.-brokered talks on Kosovo's future status was also focusing on its debts, liabilities and investments, as well as the restitution of private property nationalized by communists after World War II. "We will focus on all areas of economy, internal and foreign debts, but we will also demand wider discussion about ownership issues," Serbian negotiator Dusan Celic said before the talks. 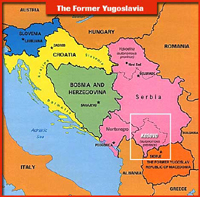 Serbia still claims ownership over almost all major assets in Kosovo, including a major power plant, mines and a number of factories throughout the province. Many assets have been sold to private owners under the auspices of the Kosovo Trust Agency, a U.N. entity responsible for privatizing mainly inefficient and dilapidated enterprises and putting them on solid legal footing. Privatization is a sensitive issue in Kosovo, which was placed under U.N. administration in 1999 following NATO air strikes that ended a Serb crackdown on separatist ethnic Albanians.

The process is complex because it is unclear whether Kosovo will become independent or remain part of Serbia. Skender Hyseni, negotiating on behalf of Kosovo's majority ethnic Albanians, told reporters before the talks that his delegation would demand a discussion about war damages from the 1998-99 conflict and a "series of open issues related to former Yugoslavia's debts, and pensions and property."

U.N.-appointed mediator Albert Rohan said the talks also would address "the question of the separation or the partition" of the international debt inherited from the former six-republic Yugoslavia between Serbia and Kosovo. Rohan said negotiators would try to determine what amounts would have to be allotted to their World Bank debt or to the so-called London and Paris Clubs of investor countries. Both Serbia and Kosovo were integral parts of the former Yugoslav federation, and in the 1970s and 1980s, millions in international loans were allocated for the development of Kosovo's industry and infrastructure.

The sixth Vienna meeting follows five rounds of largely futile discussions on reforming Kosovo's local government and on allowing the province's Serb minority to run its affairs in areas where they form a majority. Last week, both sides reached a tentative agreement over the protection of Serbian Orthodox religious sites in the province. Serbian negotiator Aleksandar Simic accused the United Nations of "pushing too hard."

"This round of talks is forced," he said Tuesday night, adding that in meetings in Belgrade with an EU envoy, "we failed to agree on the basics." On Tuesday, the Serbian government proposed extensive autonomy for Kosovo, but insisted on keeping ultimate sovereignty over the breakaway province. Outlining Belgrade's offer, Slobodan Samardzic, a member of Serbia's negotiating team, insisted that "Kosovo must remain part of Serbia ... with a high degree if autonomy," including the right to have its own police, but not a military force.

But Kosovo's ethnic Albanians want full independence from Serbia. Kosovo's deputy Prime Minister Lutfi Haziri, a key negotiator, dismissed the Serbian offer as "an old formula ... unacceptable and unreal." "There's no other acceptable solution apart from independence with full sovereignty," he said. The Vienna talks are part of a U.N.-led effort to settle Kosovo's legal status by the end of the year. U.N. mediators led by former Finnish President Martti Ahtisaari are expected to call in July for direct talks on the province's future, reports the AP.