Soldiers began delivering bags of rice to village chiefs in Indonesia's earthquake zone Monday, but survivors said it wasn't enough to feed the tens of thousands of people camped in front of shattered homes. "We have 300 families in this village and have only gotten two sacks of rice," said Lastri, 27, begging beneath the blazing sun, a 5-month-old baby in her arms. "It's not enough." 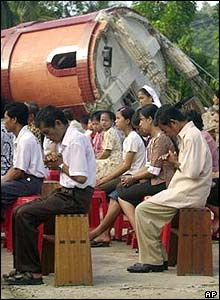 More aid was coming a plane chartered by the U.N. children's agency touched down near the disaster area, and U.N. trucks traveled roads lined with increasingly desperate children, women and elderly seeking handouts. The United States , which pledged US$2.5 million to the relief effort, said 100 military doctors and nurses also were on the way, carrying surgical, laboratory, dental, and X-ray equipment.

But cracks in the runway at the region's main airport caused by Saturday's 6.3-magnitude quake in central Java, and the poor condition of roads in the mountainous region were hampering aid delivery efforts. The government's Social Affairs Ministry raised the official death toll by about 800 to 5,137 on Monday, saying the new figure accounted for bodies that were buried in mass graves immediately after the quake.

The government said an estimated 200,000 people were homeless, most living in improvised shacks close to their former homes or in shelters erected in rice fields. Hospitals are overflowing with bloodied survivors. In a worrying sign, a scientist studying nearby Mount Merapi , which has been belching gas and lava for weeks, said its volcanic activity had increased threefold since the quake.

Lava and hot clouds of gas were avalanching 3 kilometers (2 1/2 miles) down the volcano's slopes Monday, said volcanologist Subandriyo. President Susilo Bambang Yudhoyono visited refugees Monday and acknowledged a "lack of coordination" in aid distribution. He urged government officials to be "more agile." "I saw in many areas that there are many things that need to be speeded up," said Yudhoyono, who has moved his office to the nearby ancient city of Yogyakarta to supervise relief operations.

"We have received food and medicine from the government but it's not enough," said Suparno, a neighborhood official in Bantul who goes by one name, like many Indonesians. "How can I distribute 40 kilograms (88 pounds) of rice to 1,200 people?" Thousands of people lined main roads in the disaster zone, holding out whatever containers they could find as makeshift donation boxes. Money given would be used to buy rice, oil and candles, they said. "Please give me something, I'm hungry," 7-year-old Sari told passing drivers, standing beside a group of children who were carrying banners that said "We have not gotten any aid" and "Help us."

A group of teenagers raced up to a slowing truck and managed to steal some supplies off the back, but their excitement was short-lived. "I thought it was food, but it was just soap and tooth brushes," said Andi Marwanto, 16. In Jamprip, a village of 300 families, Edi Sutrisno, 37, helped unload a small supply of aid from a military truck two bags of rice, nine boxes of dried noodles and two boxes bottled water.

"It's the first we've gotten since the quake," he said. "Of course it's not enough for all of us, not even for a day." Some 22 countries have contributed or pledged assistance to the Southeast Asian country, the U.N. Office for the Coordination of Humanitarian Affairs said in Geneva . The agency said it has released US$100,000 ( Ђ 78,000) in emergency funds to get the relief effort going, but said it will need much more to send additional food, medicine and other supplies. An emergency appeal by the global body is expected later this week.

The area affected by the quake stretches across hundreds of square kilometers (square miles) of mostly farming communities to the south of Yogyakarta , large swathes still left without electricity. Indonesia said it hoped foreign aid would account for 50 percent of the rehabilitation costs, estimated at 1 trillion to 1.5 trillion rupiah (US$108 million to US$161 million; 84 million to 126 million).

The quake was the fourth destructive temblor to hit Indonesia in the past 17 months, including the one that spawned the Dec. 26, 2004 , Indian Ocean tsunami that left at least 216,000 dead or missing. The country also is battling a bird flu crisis and a spate of terror attacks by al-Qaida-linked Islamic militants. Indonesia , the world's largest archipelago, is prone to seismic upheaval due to its location on the so-called Pacific "Ring of Fire," an arc of volcanos and fault lines encircling the Pacific Basin . It has 76 volcanos, the largest number in the world, reports the AP.