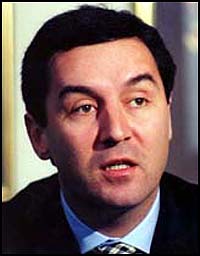 Meeting with top EU officials on his first foreign trip since Montenegrins voted to split from their union with Serbia, Prime Minister Milo Djukanovic reiterated that Montenegro's goal was full EU membership.

"I'm confident that a small and flexible system such as Montenegro ... can within several years fulfill all the conditions for European membership," Prime Minister Milo Djukanovic told reporters.

EU Enlargement Commissioner Olli Rehn was also upbeat about Montenegro's chances, saying the tiny Balkan republic could conclude a "stability and association agreement" by the end of the year. The agreement is seen as the first step toward EU membership, the AP reports.

Montenegro's peaceful secession under EU auspices has sparked speculation that it could serve as a precedent for numerous other independence-minded regions in Europe and elsewhere, including Spain's Basque and Catalonia regions, Azerbaijan's Nagorno-Karabakh enclave, Canada's Quebec province and Indonesia's West Papua.

Preliminary official results of Montenegro's May 21 plebiscite showed that 55.5 percent of voters opted for dissolving the union with Serbia - just half a percentage point, or 2,090 votes, over the 55-percent threshold set by the EU to validate secession.

Djukanovic described the outcome as "a huge victory for EU policy in the Balkans," noting that the secession of other Yugoslav republics 15 years ago resulted in bloody wars and tens of thousands of deaths, the AP reports.

Serbia and Montenegro have been negotiating the stability and association agreement to open up economic and political ties with the EU on parallel tracks since 2004. The EU froze talks with Serbia last month, after it failed to deliver a key war crimes suspect to the U.N. court in The Hague, but Rehn said negotiations with Montenegro would continue.