A Nepalese peacekeeper was killed and seven others were feared kidnapped by militiamen during a military operation in Congo 's volatile northeast, U.N. officials said Monday. The soldier died Sunday some 100 kilometers (60 miles) northeast of the regional capital, Bunia, said Kemal Saiki, the chief U.N. spokesman in Congo . Three Nepalese soldiers were also wounded. "They are now at a U.N. hospital and out of danger," Saiki said. 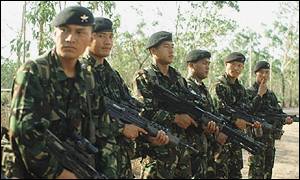 The death was the first suffered by the U.N. force in Congo since January, when eight Guatemalan peacekeepers were killed in a gunbattle with Ugandan rebels. The Nepalese peacekeepers were searching for militias from the Congolese Revolutionary Movement during a U.N.-backed government offensive in the region.

It was not clear how many peacekeepers were involved, but a U.N. base lost radio contact with seven Nepalese troops who had gone out to search for fleeing militias and did not report back early Sunday. Saiki had no information on their fate and gave no other details.

"The seven soldiers are lost, we don't have any information on them at the moment," Saiki said. "The operation was being carried out in difficult conditions, we have sent out military units to look for them." A U.N. peacekeeper in Bunia, who declined to be identified because he is not authorized to speak to the media, said the seven Nepalese soldiers had been captured by militiamen.

Other U.N. officials said U.N. helicopters and armored personnel carriers had been dispatched to hunt for the missing men. A 17,000-strong U.N. peacekeeping mission in Congo , the world's largest, is helping an ill-trained and poorly paid Congolese army flush the well-armed and -trained rebels out of civilian zones in time for elections slated for July 30.

The northeastern province of Ituri, of which Bunia is the capital, has been plagued by violence for years, with ethnic clashes killing 50,000 people since 1999. Militias in the province are regrouping after a series of U.N.-backed military offensives set them back in late 2004. The Congolese Revolutionary Movement, which was created in December and has grown to 1,500 fighters, is a coalition of loose militia groups that are aiming to block U.N.-backed efforts to secure Ituri province in time for the vote, the country's first in four decades.

A 1998-2002 war drew in armies from six different countries. The elections are meant to put an end to political infighting that led to the conflict. Saiki said Sunday's death brought to 74 the total number of peacekeepers who have died in Congo since the U.N. peacekeeping mission first deployed here with observers in 1999, reports the AP.