Brazilian President Luiz Inacio Lula da Silva said Monday that a breakthrough in negotiations for a global trade treaty is still possible, but world leaders must meet soon and be prepared to make concessions. Without crucial summit-level talks soon, the World Trade Organization could fail to reach an agreement that would slash trade barriers and boost commerce among its 149 member nations, Silva said on his biweekly "Coffee with the President" radio show. 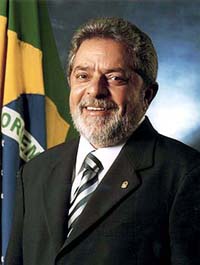 "We have to decide what planet Earth we want in 20 or 30 years," Silva said. "If we don't reach an agreement it will be a huge step backward." He said developing countries are seeking only "small" concessions from the European Union and the United States . Talks sponsored by the Geneva-based WTO have been deadlocked despite a spate of high-level negotiating sessions over the last six months.

On Monday, the European Union called on the United States Monday to rescue the trade talks by matching its offer to cut farm subsidies. Countries like Brazil have said they won't open up their markets until rich countries give ground on their agricultural tariffs and subsidies, which poor nations say are unfair to their own farmers.

Silva said he was willing to meet anywhere to push talks forward ahead of July's Group of Eight summit, where the negotiations are expected to be a key issue. The G8 is composed of the world's seven richest nations plus Russia , and Brazil was invited to attend.

"We've reached the time and hour for a political decision" by world leaders instead of more talks by finance ministers, the Brazilian president said.

Silva spoke four days after French President Jacques Chirac visited Brazil and said Washington , not Europe , was to blame for the WTO impasse. Silva said he and Chirac had an "intense" conversation that left the Brazilian leader optimistic about a breakthrough.

"I told him that if we made a really big effort, we could get this right by July," Silva said. "I believe an agreement is possible. An end-of-April deadline was missed to schedule a conclusion to the Doha round of trade talks named after the Qatari capital, where negotiations were launched in 2001 by the end of this year.

Time is tight for Doha because of the July 2007 expiration of a U.S. "fast-track" law, which requires the U.S. Congress to either accept or reject international deals as a whole without being able to pick them apart line by line. The talks aim to boost the global economy and lift millions out of poverty worldwide by lowering trade barriers across all sectors, with particular emphasis on developing countries. Brazil is a leader of the Group of 20 bloc of developing countries, reports the AP.