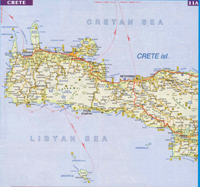 Police did not identify of the man and did not confirm media reports that he was a Turkish national. Two other tourists were also briefly detained and freed without charge.

The base at Souda Bay houses Greek military facilities as well as a U.S. naval base.

Greece's military observes a strict policy against photographing bases and military airports, where warning signs are usually on display.

In 2001, a group of British and Dutch aviation enthusiasts, or plane spotters, spent five weeks in jail pending trial for taking notes on aircraft at Greek military bases, the AP reports.

A court found them guilty of espionage-related charges the following year, but the ruling was overturned on appeal.