6 world powers to meet in Vienna to discuss Iran

Foreign ministers of the five permanent members of the U.N. Security Council and Germany plan to sign off later this week on a package of incentives and penalties meant to reward Iran if it gives up uranium enrichment and punish it if it doesn't, diplomats said Monday. Agreement at the meeting, planned for Thursday in Vienna , could open the way for U.N. Security Council sanctions if Tehran remains defiant and refuses to relinquish the technology that can be used to make the fissile core of nuclear warheads. 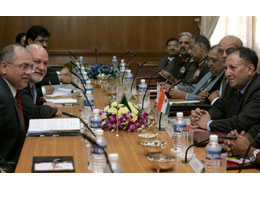 6 world powers to meet in Vienna to discuss Iran

Tehran appeared unimpressed. While one official repeated that Iran is permitted to enrich uranium for peaceful purposes under the Nuclear Nonproliferation Treaty, another announced that his country had experimented in technology that can be used to make the hydrogen bomb. Tehran 's main goal was recognition of "the essential right of Iran to have nuclear technology," Foreign Minister Manouchehr Mottaki said during a visit to Malaysia . In the Iranian capital, state television quoted nuclear official Sadat Hosseini as saying his country "is competing with the advanced world in the field of producing nuclear energy through fusion."

Fusion is the main principle behind the hydrogen bomb, which can be hundreds of times more powerful than atomic weapons that use fission. In a hydrogen bomb, radiation from a nuclear fission explosion sets off a fusion reaction responsible for a powerful blast and radioactivity. Peaceful uses of fusion are still in the experimental stage.

The European Union, the United States, Japan, China, Russia and others hope to set up a demonstration power plant in the southern French town of Cadarache around 2040. Officials project that 10 percent to 20 percent of the world's energy could come from fusion by the end of the century. International concern about Iran's nuclear aims has been focused on fears it could be trying to make a fission-type nuclear weapon by enriching uranium to weapons-grade level, and the comments by Hosseini were likely add to concern about Tehran's interest in fusion.

But former U.N. nuclear inspector David Albright said the announcement was probably "not very worrisome." "They like to pretend they are competing but their program is (probably) pretty rudimentary," said Albright, who runs the Washington-based Institute for Science and International Security.

"One part of their (nuclear) strategy is to say, 'we have it all, so you can't stop us,"' he said. Any package approved in Vienna on Thursday would then formally be presented to Tehran by France , Britain and Germany the three European nations which broke off similar talks with Iran in August after it resumed activities linked to enrichment, which can be used to make the fissile core of nuclear warheads.

The Security Council gave Iran until the end of April to suspend all activities linked to enrichment. Instead of complying, Iran announced last month that it had for the first time successfully enriched uranium and was doing research on advanced centrifuges that would let it produce more of the material in less time. Indirectly linked to any deal the foreign ministers could approve would be agreement on a key issue that for months has hobbled action by the Security Council's permanent members on formulating a possible resolution tough enough for Washington while also acceptable to Moscow, a close ally of Tehran.

If Iran remains defiant, the proposal as outlined to the AP by diplomats familiar with the text calls for a Security Council resolution imposing sanctions under Chapter VII, Article 41 of the U.N. Charter. But it avoids any reference to Article 42 which is the trigger for possible military action to enforce any such resolution. It specifically calls for new consultations among the five permanent Security Council members on any further steps against Iran . That is meant to dispel past complaints by the Russians and Chinese that once the screws on Iran are tightened, it would automatically start a process leading to military involvement.

Among the possible sanctions, according to a draft proposal shared in part with the AP, are a visa ban on government officials, the freezing of assets, blocking financial transactions by government figures and those involved in the country's nuclear program, an arms embargo and a blockade on the shipping of refined oil products to Iran. If Tehran agrees to suspend enrichment, enter new negotiations on its nuclear program and lift a ban on intrusive inspections by the International Atomic Energy Agency, rewards would include agreement to "suspend discussion of Iran's file at the Security Council," as well as help in building a peaceful domestic nuclear program that uses an outside supply of enriched uranium, reports the AP.