Hundreds of Tamils rally for independent state in Sri Lanka

Hundreds of people rallied in the Nordic capitals on Monday, calling for a Tamil state in Sri Lanka and urging the government in Colombo to end attacks on Tamil civilians. In Copenhagen , about 500 demonstrators, including dozens of children, marched peacefully in pouring rain, waving Tamil Tiger flags and posters of Velupillai Prabhakaran, the leader of the rebel group. 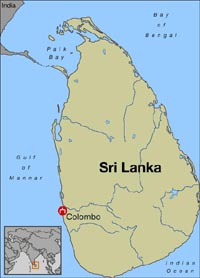 Hundreds of Tamils rally for independent state in Sri Lanka

In the Norwegian capital, Oslo , Tamil organizations staged a rally of about the same size in front of Parliament. Norway helped broker a fragile 2002 peace accord between the rebels and the government. Suspected Tamil Tiger rebels in Sri Lanka , meanwhile, attacked government troops in two locations, killing one soldier and wounding another, despite efforts by the guerrillas and the government to bolster a fragile truce.

Nearly 300 people have been killed since April amid escalating attacks that each side has blamed on the other, raising fears that Sri Lanka is heading back to all-out war. A few dozen members of a Sri Lankan Tamil association in Finland demonstrated briefly Monday morning outside the offices of the EU Commission in central Helsinki and marched peacefully to the Foreign Ministry, the Finnish news agency STT said.

The demonstrators delivered a petition to the government protesting plans by the EU to ban the Liberation Tigers of Tamil Eelam and recent civilian deaths in Sri Lanka . In Sweden 's capital, Stockholm , about 100 people gathered at a downtown square, calling for an independent Tamil state, reports the AP.