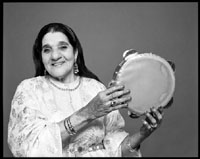 Her death in Paris on May 15 was announced by her recording house, Because Music. Two days before she died, she gave a performance at the Zenith concert hall in the French capital, her home for the last 28 years of her life.

Born in rural Algeria in 1923 and orphaned at an early age, Rimitti had a troubled childhood and became a troubadour with a traveling musical group at age 20.

Illiterate, she memorized her songs. "Songs walk through my head and I retain them in my memory. No need for paper or pen," she said.

The Algerian government banned her songs in the 1960s, but rai music circulated in bootleg recordings. She finally emigrated to France in 1978.

She recorded her first album in 1952, and her most recent one, "N'Ta Goudami," was released in November.

Her birth name was Saadia, which means joyful. Cheikha Rimitti was her stage name.

World music aficionados rediscovered her in the 1990s, and in 1994 she released an album with Robert Fripp, from King Crimson, and Flea, of the Red Hot Chili Peppers. In 2001, she performed in New York, at Central Park SummerStage, the AP reports.

She is survived by three children and 18 grandchildren, all of whom live in Algeria.