President Evo Morales says he is lifting the military guard at deployed at energy installations around the country when Morales nationalized Bolivia 's natural gas industry. "We can't keep the soldiers at the petroleum wells," Morales said in comments Sunday. "We're going to withdraw the armed forces." 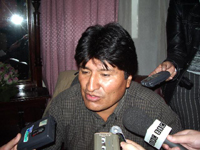 Morales launched his nationalization plan on May 1 and ordered troops to guard all energy installations as well as gas stations and offices of foreign companies operating in Bolivia . The guarding of the gas stations and offices lasted a few days, provoking criticism in Bolivia and bad feeling in the two largest energy investors here Brazil 's Petroleo Brasileiro SA or Petrobras and Spanish-Argentine Repsol YPF.

As part of the nationalization, Bolivia 's state energy company plans to take majority control over all energy operations in the country. The foreign companies, who have invested US$3.5 billion since the 1990s, have 6 months to negotiate new contracts with the government of leave the country. Bolivia has the continent's second largest natural gas reserves after Venezuela and currently exports its gas to Brazil and Argentina , reports the AP.