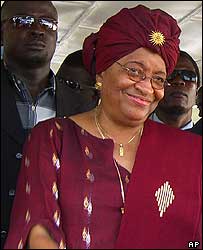 She took office in January to lead one of the world's poorest countries, battered by back-to-back civil wars from 1989 to 2003 that left 200,000 people dead and 3 million of its citizens scattered abroad. On Tuesday, Johnson Sirleaf was to give a speech on the impact of war on women, during a private function at the Wilton Park Conference Center .

She was scheduled to meet Wednesday with the queen, and to hold talks with Britain 's international development secretary Hilary Benn and Lord Triesman, the minister for Africa . Johnson Sirleaf was expected to press Britain to do more to assist Liberia 's reconstruction.

"There is a huge task in front of her to deliver the governance and development agendas that will allow Liberia to turn around years of disastrous conflict and decline," a British foreign office spokesman said on customary condition of anonymity, in line with policy. Also Wednesday, she would give a public lecture to the London-based defense think tank, the International Institute for Strategic Studies, reports the AP.