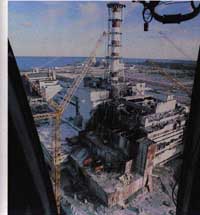 He will be the first person interrogated in a lawsuit brought against the French government by more than 500 people who have developed thyroid and other cancers they believe are linked to the 1986 explosion that spewed radiation.

The newspaper Liberation reported that judges suspect him of hiding the levels of radioactive damage to France, and said he could be accused of involuntary injuries.

The French government has been widely ridiculed for insisting after the accident that the radiation did not reach France, though neighboring countries all said it had passed through their skies. Other European countries pulled milk from shelves or recommended that children take iodine tablets to ward off radiation, while France took none of these steps.

Researchers and cancer victims accuse the government of intentionally downplaying the effects on France of the explosion, partly to protect the powerful nuclear industry, the AP reports.

French government agencies have adjusted some of their initial radiation estimates since the accident, but deny any intentional deception.