Chancellor Angela Merkel on Monday pledged a "fundamental overhaul" of a flagship jobless benefit reform introduced by the previous German government. The reform, which came into effect in January 2005, reduced benefits to the long-term unemployed and was aimed at increasing pressure on them to take jobs. However, the costs it has generated have exceeded significantly initial estimates, adding to strains on the tight national budget. 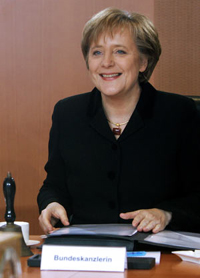 On Thursday, parliament is expected to approve a bill aimed at cutting costs by Ђ 3.5 billion (US$4.5 billion) over the next three years by introducing more checks and sanctions for abuse of the system. This fall, "there will be a fundamental overhaul, in which other questions will come into focus" for example, the low-wage sector and accommodation costs for beneficiaries, Merkel said.

Experience so far has raised the question of "whether the overall incentive effect of this is such that people are really encouraged to take a job," she said. Merkel stressed, however, that benefits would not be cut further. The reform was introduced by former Chancellor Gerhard Schroeder's center-left government as it fought double-digit unemployment amid a stagnant economy.

It was passed with the help of the opposition at the time, led by Merkel, which then controlled the upper house of parliament. The German economy Europe 's biggest has picked up, but the unemployment rate remained at 11.5 percent in April, reports the AP.