Italian Premier Romano Prodi pledged his government's strong support for efforts to revive European integration Monday, although he acknowledged that it was "virtually impossible" to save the EU constitutional text rejected by French voters a year ago. Making his first official trip since taking office, Prodi also expressed support for plans for the European Union to take on new members from the Balkans, despite public misgivings about further EU expansion. 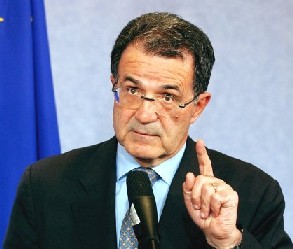 "We've stressed how important it is to include the countries of the Balkans in the union," Prodi told reporters after talks with European Commission President Jose Manuel Barroso. "The absorption capacity of the union should allow this process to go forward." Prodi said Italy would play a leading role in relaunching efforts to bind the EU nations closer together, which were frozen when the constitution was rejected by referendum in France a year ago Monday, and the Netherlands days later.

He said the constitutional proposals had to be simplified to secure backing from all 25 member nations. "It will be virtually impossible to have exactly the same constitution," Prodi admitted. "We are trying to simplify the text in order to garner consensus throughout the European Union ... we do not want to run the risk of having a second 'no' to the constitution", reports the AP.