Turkey 's foreign minister on Monday pressed Israel to resume long-stalled peace talks with the Palestinians, saying an Israeli plan to unilaterally draw its borders with the West Bank would not lead to a lasting solution. Abdullah Gul, speaking to reporters at a joint news conference with Israel 's visiting foreign minister, Tzipi Livni, stressed the need for a negotiated solution. 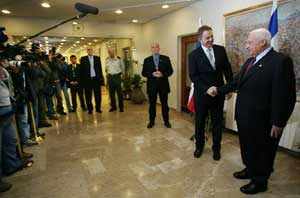 "There is no other way," Gul said. Israel says it is willing to renew peace talks with the Palestinians' moderate president, Mahmoud Abbas, but if those efforts fail it will withdraw from much of the West Bank , strengthen major settlement blocs and set Israel 's borders with the Palestinians. Israel withdrew soldiers and settlers from the Gaza Strip last year.

Prospects for formal negotiations between the two sides have dimmed since Hamas' victory in January elections. The Islamic militant group has refused international demands to renounce violence and recognize Israel since taking over control of the Palestinian government.

Livni defended unilateral steps, saying Israel was forced to take them in the face of the reluctance of the Hamas-led government to cooperate. She also said ending Israel 's presence in Palestinian areas could open the way for a Palestinian state and would deprive its leaders of excuses not to crack down on militants.

"We don't want to control the life of Palestinians. We want to find a way to form their own state and to take responsibility," Livni said. Turkey, which has strong relations with Israel and the Palestinians, hosted a Hamas delegation in February but failed to persuade the group's political leader, Khaled Mashaal, to work to temper Hamas' radical ideology.

Israel , which has sought to isolate the Palestinians' new Hamas government, protested Turkey 's decision to host Mashaal. But Livni indicated relations between Israel and predominantly Muslim Turkey remained strong. Turkish President Ahmet Necdet Sezer is to visit Israel next week, Gul noted. Israel places great importance on its relations with Turkey , one of the only Muslim nations to have good relations with the Jewish state as well as the Arab world. The two countries have long had strong military ties and important trade links.

But differences remain between the two nations over how to deal with Hamas. In particular, Turkish Prime Minister Recep Tayyip Erdogan has criticized the European Union and other world powers for cutting off direct financial aid to the Hamas-led government, reports the AP.