Authorities across Europe arrested 41 Bulgarians on Monday after Italian police uncovered a network that exploited hundreds of children sold by impoverished families in the eastern European country, officials said. The arrests took place in northern Italy , Bulgaria , Germany and Austria , and an additional 75 people were placed under investigation, said Carabinieri paramilitary police in the northeastern Italian town of Trieste . 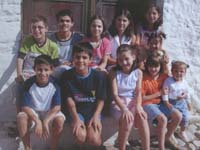 Investigators believe the network forced children 9 years old and older to commit petty thefts, threatening and beating them if they did not take to the streets and fill their daily quota, the Carabinieri said in a statement. In one case, police in Venice came across a 13-year-old pickpocket who was eight months pregnant, the statement said.

"The group took advantage of the fact that a child under 14 cannot be arrested in Italy ," Carabinieri official Gabriele Passarotto said. The children were "relegated to the status of mere objects" once their families rented them out to the network in exchange for a share in the profits or an immediate cash sum, the statement said.

Charges against the alleged members of the network include enslavement as well as drug trafficking and favoring illegal immigration activities allegedly financed with profits from the thefts. During the two-year investigation, authorities also found evidence of sexual exploitation when undercover officers were offered to buy girls to be used as prostitutes, the statement said, reports the AP.