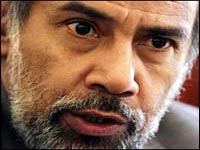 Today, Gusmao faces a quandary that, in some ways, is more complex and difficult than the struggles he faced in battle and in a jail cell. The challenge is to restore a sense of national unity to one of the world's newest countries after days of violence in the capital, Dili.

Tucked at the foot of hills, the city on a bay was mostly peaceful aside from scattered arson attacks on Monday, and Gusmao and other government leaders held emergency talks as Australian peacekeepers patrolled the streets on foot or in armored personnel carriers.

"If you trust me, please go home," he told a crowd after the meeting, assuring them that he would help to craft a solution to the chaos.

Tens of thousands of East Timorese have fled the capital, and the United Nations evacuated hundreds of employees after days of fighting involving rebel soldiers, police and gangs.

Despite the lull in the unrest, East Timor faces a tough path ahead because the mix of political, historical and economic tensions that triggered the violence is intact. While many East Timorese revere Gusmao, it is unclear whether he can appease all sides in a conflict stemming in part from Indonesia's invasion of the former Portuguese colony three decades ago.

Much of the antagonism on the streets revolves around accusations, often unfounded, that one person or another harbors sympathies for Indonesia, which pulled out of East Timor in 1999 after a long, harsh rule.

But the idea that Indonesia could resume its rule of East Timor is a fantasy for most, and many such charges appear to be a mask for other resentments and rivalries.

For example, some East Timorese see a rift among old pro-independence campaigners such as Prime Minister Mari Alkatiri, who sat out Indonesian rule in relative comfort abroad, and those such as Gusmao, who endured the full fury of the military occupation.

Some of the gangs which monopolized the violence in recent days with seemingly random or tit-for-tat attacks might have no political motives at all. In the absence of a functioning police force, jobless youths might have seized an opportunity to loot or settle scores.

Gusmao, who was unable to head off this explosive blend, appeared to be a reluctant politician after East Timor declared independence in 2002 following three years of U.N. nation-building.

Gusmao said he didn't want to run for the partly ceremonial job of president, but acquiesced amid popular demand and won in a landslide. Alkatiri, a Muslim in a country that is more than 90 percent Roman Catholic, became prime minister, a job with more political clout.

One of the catalysts for the recent violence in impoverished East Timor was an uprising by soldiers who were fired over a pay dispute.

But some East Timorese say Alkatiri has aggravated tensions by being arrogant and awarding construction contracts to family and friends, and that Gusmao must use his moral and constitutional authority to dissolve Parliament rather than wait for elections next year.

"This is the time for him to have the courage to take over the leadership of this country in this crisis situation," said Salvador Ximenes Soares, chief editor of the Suara Timor Lorosae, a leading newspaper in East Timor.

"People are sometimes disappointed with him because he has to take some tough decisions, and he's looking for balances," said the editor, who served as a lawmaker during Indonesian rule but lost the job after criticizing human rights abuses by the Indonesian military.

The problem is that ousting Alkatiri could make Gusmao seem authoritarian, and would undermine his oft-stated desire to let the democratic process run its course in East Timor, the AP reports.

The adulation that Gusmao commands was evident on Monday outside the government building where he and other leaders met. "Viva Gusmao," a crowd shouted.

The scene evoked the heady days just after Indonesian rule, days of euphoria rather than uncertainty.