A car bomb exploded in an outdoor market Friday in eastern Baghdad, killing at least eight people and wounding 31, police said, as Iraq's new prime minister expressed hope two key security posts could be filled within days. Prime Minister Nouri al-Maliki planned to meet with Iranian Foreign Minister Manouchehr Mottaki later Friday, a day after the Iraqi leader said he may soon be ready to name the two men who will be charged with carrying out his pledge to take over security for Iraq within 18 months. The initial focus of the effort will be restoring order for the capital's more than 5 million residents, who have suffered the most from suicidal killers, roadside bombs and sectarian death squads. 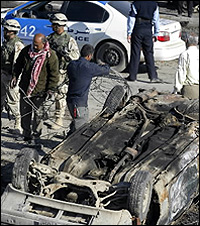 "It is time for those who want to steal the smiles from the Iraqi people and turn its women into mourners to be silenced," said Deputy Prime Minister Salam Zikam Ali al-Zubaie, the Sunni Arab who is filling the defense post temporarily. The announcement came on Thursday, a day that saw 13 killings, including the deaths of two U.S. soldiers who were killed by a roadside bomb in southern Baghdad.

Violence resumed Friday when a car bomb exploded in an outdoor market in eastern Baghdad, killing at least eight people and wounding 31, hospital security official Sgt. Sabah Muhsin said. The explosion occurred at 10 a.m. in the Nahda area, police Lt. Ahmed Mohammed said, a time when the market, where old furniture, household goods and appliances are sold, was especially busy during the start of the Islamic weekend.

Elsewhere in the capital, a roadside bomb missed an American convoy but injured three Iraqis on a minibus, police officer Maitham Addurraq said. A roadside bomb also hit a police patrol at 8:30 a.m. in the northern city of Kirkuk, killing one policeman and wounding four others, police Brig. Khatab Omar said.

Al-Zubaie did not provide details on al-Maliki's plans to restore security in Baghdad. However, President Jalal Talabani said securing the country would probably require a unified unit of soldiers and police. "We are forming a force to protect Baghdad by the best and trained elements in the interior and defense ministries. They will be under one leadership and under the direct supervision of the prime minister," Talabani told al-Furat TV.

The various Iraqi police and army units now wear a variety of uniforms. Talabani said the new unit would wear one uniform, "be the only authorized force to travel in Baghdad." The goal is to eliminate death squads and other armed groups who roam the capital disguised as security forces. There has been little discussion about al-Maliki's announced plan for a phased security takeover of Iraq's 18 provinces, or how it would lead to the eventual withdrawal of foreign troops.

The strategy has been for American and international forces to hand over security control for specific regions and redeploy to larger bases where they could act in a support or reserve role. A final future stage would involve the drawdown of troops from those bases.

Mottaki arrived in Baghdad Friday, according to Iraqi state television. The Foreign Ministry said he would meet with al-Maliki and other Iraqi officials during his visit. The Iranian foreign minister was supposed to have come to Iraq on May 15 but the visit was delayed. Mottaki's predecessor, Kamal Kharrazi, visited Iraq last year and the two sides issued a joint statement blaming Saddam Hussein for the bloody 1980-1988 Iran-Iraq war.

U.S. President George W. Bush and British Prime Minister Tony Blair acknowledged difficult times in the Iraq war during their meeting in Washington on Thursday and admitted making costly mistakes, but vowed to keep troops there until the new Iraqi government takes hold. "Despite setbacks and missteps, I strongly believe we did and are doing the right thing," Bush said in a White House news conference with Blair. "Not everything has turned out the way we hoped."

For his part, Blair said he left a meeting this week with Iraq's new prime minister "thinking the challenge is st ll immense, but I also came away thinking more certain than ever that we should rise to it." Bush declined to discuss news reports that the Pentagon hoped that the U.S. force, now at 131,000 troops, could be reduced to about 100,000 by year's end. "We'll keep the force level there necessary to win," Bush said, reports the AP.