Merkel calls for diplomatic resolution of nuclear row with Iran 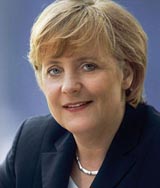 Merkel calls for diplomatic resolution of nuclear row with Iran

"It has to be done by the entire international community, including Slovakia, and not only by the United States, China and Russia," Merkel said after talks with her Slovak counterpart.

Slovakia is a non-permanent member of the U.N. Security Council and it recently called for a diplomatic resolution of the dispute.

Key members of the council agreed this week to postpone a resolution that would have delivered an ultimatum to Tehran, giving Iran another two weeks to reevaluate its insistence on developing its uranium enrichment capabilities.

The U.S. and its allies have accused Iran of seeking to develop nuclear weapons, a charge Tehran denies, saying it aims only to generate energy.

Merkel praised reforms of the Dzurinda's Cabinet aimed at improving the country's position within the EU and described them as "the right path." The backing comes little more than a month before Slovak parliamentary elections scheduled for mid-June.

Dzurinda said he and Merkel discussed bilateral cooperation and relations within the European Union and NATO. He said that relations between Germany and Slovakia "couldn't be better," reports AP.