Andy Warhol's Campbell's soup can sold for $11.7 million at auction 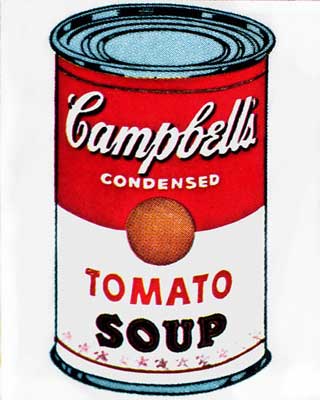 Andy Warhol's Campbell's soup can sold for .7 million at auction

It was consigned to the auction by Los Angeles art dealer Irving Blum, the auction house said, and had been estimated to sell for $10 million to $15 million.

Warhol's "S&H Green Stamps (64 S&H Green Stamps)," another work done in 1962, was sold to an unidentified telephone bidder for $5.1 million, after five people tried to buy it. It had been estimated to sell for $1.5 million.

The pop artist's silk screen portrait, "Brigitte Bardot," reportedly consigned by German industrialist Gunter Sachs who married the film sex siren in the 1960s, went for $3 million to another telephone bidder. And an unidentified Asian dealer fetched Warhol's 1964 "Flowers," a grouping of 16 silk screens, for $3.9 million, the auction house said.

All sale prices include a buyer's premium of 20 percent of the first $200,000 and 12 percent thereafter.