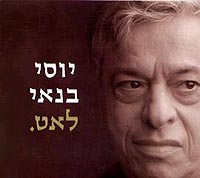 One of the country's cultural greats, the multitalented Banai was famous for his songs and satire. Much of his prose recounted scenes from his childhood in Jerusalem's Mahane Yehuda neighborhood.

"Throughout his life he was a great talent, a writer, a singer and a first-rate actor," Israeli popular singer Shlomo Artzi told Army Radio. "He was a man of the stage, of the art world."

Banai's career began in the mid-1950s as an actor with Tel Aviv's Habima theater. He quickly became known as a talented writer of satire, a comedian and a musician.

"I always loved language, whether in plays or in songs, and that's what I wanted to do all the time," Banai told Israeli TV in a recent interview.

Banai wrote many of the skits for Israel's best-known comedy trio, "Hagashash Hahiver," or "The Pale Scout," featuring his brother, Gavri.

Displaying another of his many talents, he narrated Israel TV's 1979 epic multipart history of Zionism, called "Pillar of Fire."

At the end of the 1970s Banai recorded his first album, "Yossi Banai," which was a huge success. One of the most popular songs from the album, "Me, Simone and Little Mouiz," was played repeatedly on Israeli radio stations after Banai's death was announced Thursday.

Banai went on to put out about 20 albums and to act in dozens of plays, comedies and films. Later in life, Banai's music took on a French influence and he translated many French Chansons to Hebrew.

In 1998, he was awarded the Israel Prize, the nation's top civilian honor.

Banai is survived by a wife and three children. Family members in the entertainment world include brother Gavri, nephews Meir, Yuval and Ehud Banai, singers, and niece Orna Banai, an actress.