"We believe any military action in Iran could lead to consequences that could seriously explode the situation in the region and beyond its boundaries," the reports quoted Russian Security Council secretary Igor Ivanov as saying. 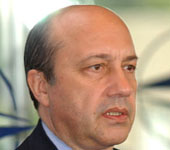 In the U.N. Security Council, veto-wielding permanent member Russia "will actively campaign for a ... decision that would offer political ways to ease the tensions," the Interfax news agency quoted Ivanov as saying.

Russian officials have repeatedly warned against the use of force in resolving the standoff over Iran's nuclear program, which the United States says is aimed at developing nuclear weapons, and have also opposed sanctions against Tehran, the AP reports.

At a meeting Tuesday, representatives of the United States,Russia, China, Britain, France and Germany agreed to tell Iran the possible consequences of its refusal to halt its uranium enrichment program and the benefits if it abandons it. U.S. Secretary of State Condoleezza Rice said Wednesday she and her counterparts on the U.N. Security Council agreed to give Iran another two weeks to reconsider its position.

Russia and China have balked at the British, French and U.S. efforts to put the resolution under Chapter 7 of the U.N. Charter. Such a move would declare Iran a threat to international peace and security and set the stage for further measures, which could range from breaking diplomatic relations to economic sanctions and military action, if Tehran refuses to comply.

The Russian Security Council is an advisory body that answers to President Vladimir Putin.

Novikov said that the talks were attended by the Iranian ambassador to Russia, Gholamreza Ansari, and Iran's deputy nuclear chief, Mohammed Saeedi.